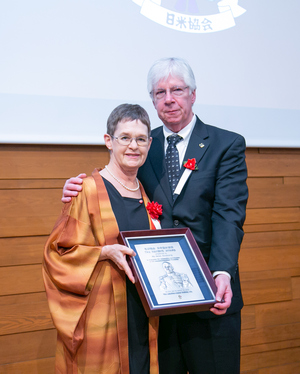 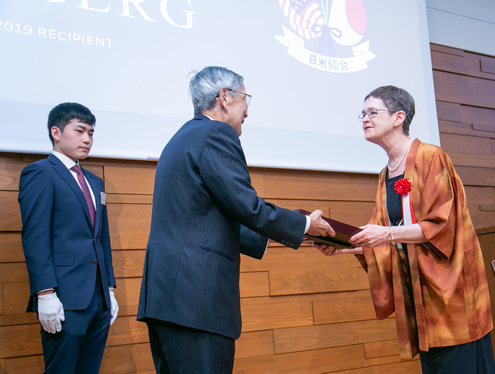 In 2019 I won a Kaneko Award presented by the America Japan Society of Tokyo. The ceremony was held in Tokyo on November 22, 2019 at the International House.

The Kaneko Award was established in 2017 to commemorate the 100th anniversary of the founding of the America Japan Society of Tokyo (AJST). It is named for its first president, Count Kentaro Kaneko who graduated from Harvard University, convinced Theodore Roosevelt to oversee the treaty to end the Russo-Japanese War and worked for the League of Nations. The Award is given to those who have worked for long years to promote people-to-people exchanges between Japan and the United States, especially people who have worked at the grass roots level.

During the announcement, made Thursday September 5 at the National Association of Japan America Societies conference in Cincinnati, it was stated "The committee selected Ms. Helen Rindsberg, who is recommended by the Japan America Society of Greater Cincinnati for her long-time contributions to enhancing the relationship between the US and Japan."

Ms. Rindsberg, now 71 years old, majored in art education in college and then taught art in public junior high and high schools for 15 years and for 15 years served as an assistant principal. After retiring from full time work, she taught art, photography and Japanese Art History at the high school and university level for 16 years. Since her first trip to Japan in 1984 she has taken many photographs there and used those photographs in classes and on her web site to introduce Japanese art, culture and history to many students and adults. Since 2004 she has volunteered as a docent at the Cincinnati Art Museum where she has been highly praised for her well-prepared approach to introducing Japanese arts and culture in a way easily accessible to people in the US.

Ms. Rindsberg has collaborated with her husband, Steve, also a photographer, in their consistent pursuit of promoting Japanese culture and enhancing the relationship between the two countries. Since 1989, they have been a home stay family for 16 Japanese students and 3 teachers for anything from 6 months to 5 years. Their relationships have become so close as to be called “American Mama and Papa.” Their extended family now includes 25 “grandchildren.” Since 1984, she has visited Japan 18 times including as the co-leader of three tours for university students and one tour for art museum docents. She and her husband collect Japanese kimonos, hanging scrolls, books and Edo-era wood-block prints (ukiyoe). She joined the Cincinnati-Dayton Taiko Group in 2000, and is now its Director. She has been President of the Cincinnati Asian Arts Society since 2008. Thus for 35 years, she has devoted considerable and significant time to leading the development of cultural exchanges between the people of Japan and America.”

Photos from 2019 Kaneko Award Ceremony
Announcement of award on AJST web site
The story of Count Kaneko, after whom the award is named